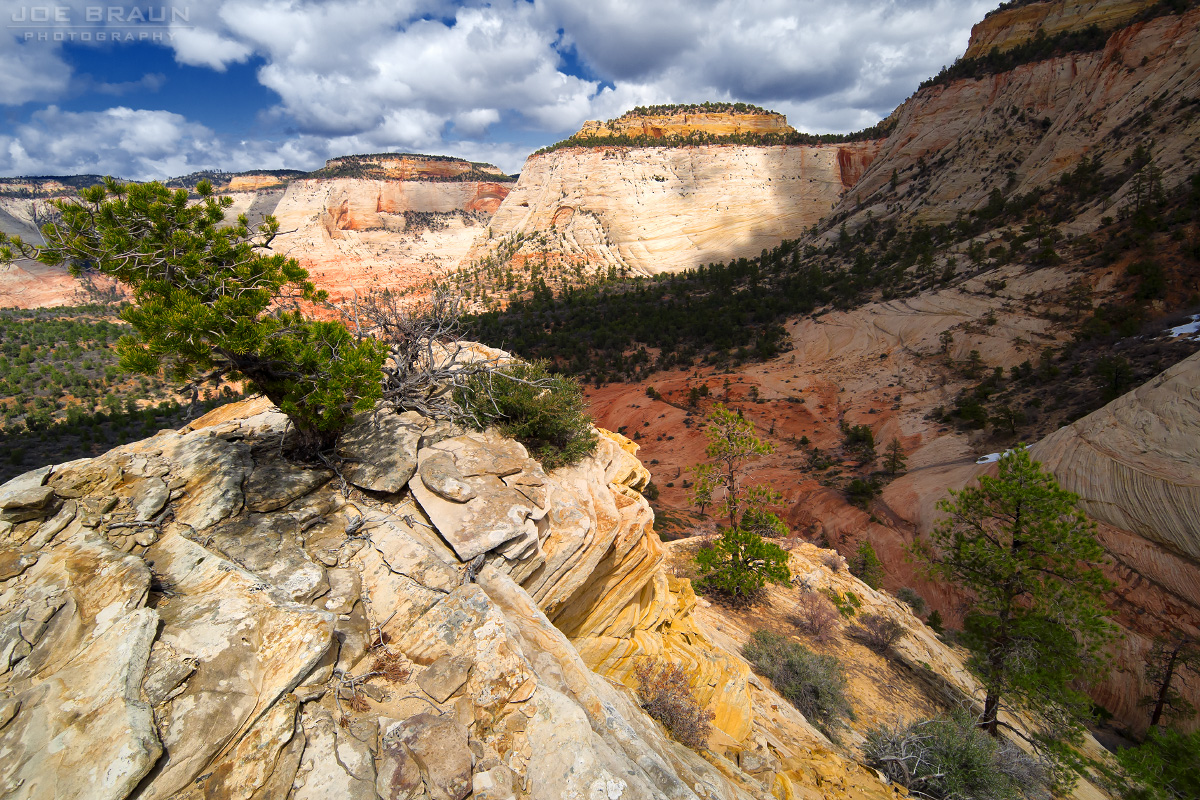 The Upper East Canyon has a plethora of drainages that are worthy of exploration and one of the more interesting ones is known as "Separation Canyon." A hike up this wash makes for a fun half day somewhat akin to "Many Pools" with many options for random exploration. A good destination is "Separation Peak," which is a minor peak at the head of the canyon that offers great views to the north and south. For those looking to spice it up a bit, the exposed scramble up to Nippletop and the hike further south to "Lonely Peak" make for a good strenuous day. Separation Canyon can also be used as the start or end of a loop hike to the south side of the East Canyon's White Cliffs.

Detailed Description:
Roughly 2.2 miles east of the second smaller tunnel, Route 9 makes a sharp south to north U-turn. To the southeast is a prominent dryfall formation, "Not Cockeye Falls." This is the mouth of Separation Canyon, but because the falls are a bit too steep for average hikers, access to the drainage is gained from the backside of this large slickrock formation. 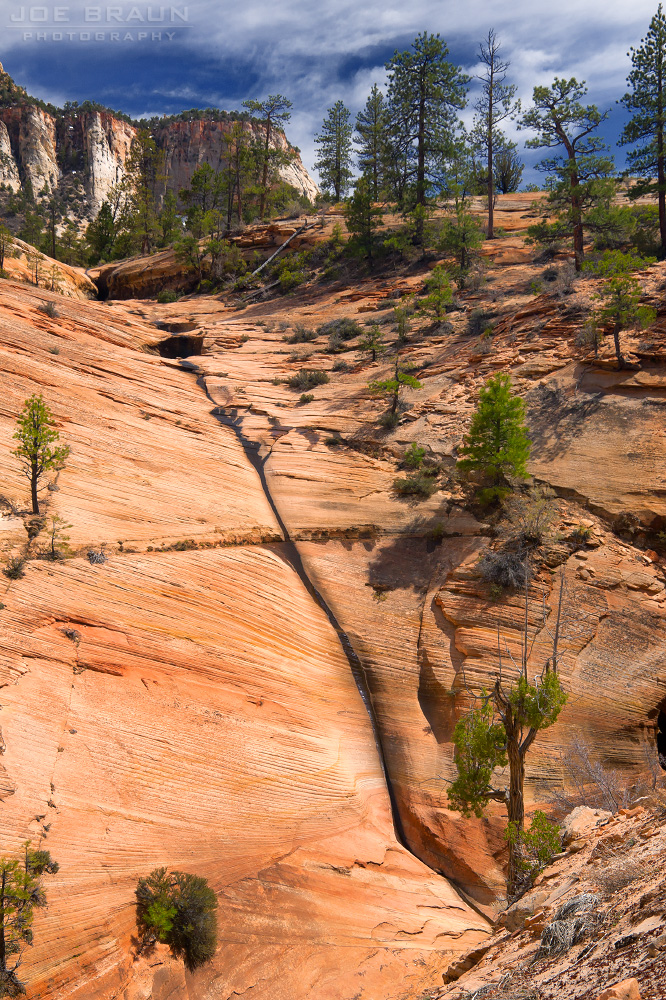 Roughly 2.6 miles from the small tunnel, two small parking spots can be found on the south side of the road.

The hike up Separation Canyon to Separation Peak may take approximately 3-5 hours total. Carefully walk the road one tenth of a mile west and stay clear of traffic as this part of the road is a bit narrow. In no time, you will come upon a welcoming slickrock area with a few hoodoos to the south of the road; hike through it to the south and descend the slickrock slabs to the bottom of Clear Creek. Scan the opposite walls to find the easiest route up the other side. A little bit of scrambling is required, but once you have gained the initial shelf, the going gets easier. Hike up the slickrock slope to reach the top of the shoulder, and then hike the slabs down the other side to join up with the main drainage of Separation Canyon.

Follow the wash upstream and hike at your leisure, either sticking to the watercourse or hiking along the slickrock slabs above the open wash. Separation Peak can be seen in the distance; it is the minor peak in the middle of the wash roughly one mile from Route 9 and is dwarfed by Crazy Quilt Mesa to the east and Nippletop Peak to the west. As you get closer, you may be tempted to leave the wash and beeline it to Separation Peak, but bushwhacking the sandy hills will be moderately irritating. (Please stick to the slickrock or watercourse as much as possible to minimize your impact on the area.)

Separation Peak makes for a good destination for dayhikers and is a great place to stop and have lunch. Once you make it to the base of the peak, the territory is all slickrock. Make your way up the slabs and explore both the north and south sides of the peak for great views in all directions. 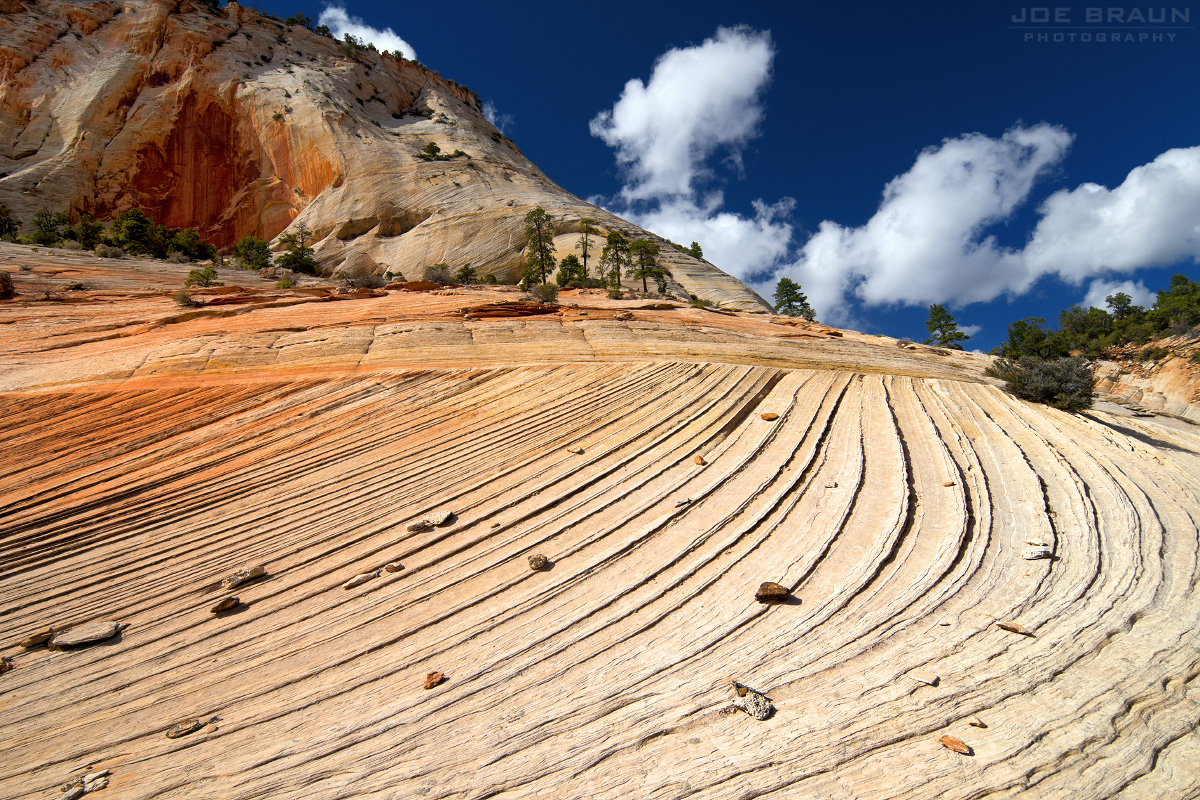 Note that the actual highpoint of Separation Peak is a small formation that requires exposed Class IV climbing on some dirty slabs and is not recommended for most hikers. Don't fret as the hiker-accessible views are just as good. Once you have had your fill, return the way you came.

If you want to add a bit more to the hike and have an extra 2-3 hours to spare, Lonely Peak is another worthy minor peak. From the saddle of Separation Peak, hike south-southwest down into a lovely slickrock bowl under Nippletop; this area is a garden of interesting rock formations. Continue west up to the sandy shoulder of Lonely Peak, then loop around south and then east to gain elevation. Scan the rock formations for a Class 2 route to the top of the ridgeline, and then enjoy the hike along the top of the spine. Great views can be had of Parunuweap Canyon far to the south. Return the way you came.

Nippletop is the imposing mountain to the west of Separation Canyon, aptly named for the formation at the very top and center of the peak which can easily be spotted from the road. The scramble to the top could take an additional 2-4 hours with a steep elevation gain of 800 feet. WARNING: This route involves exposed Class 3 scrambling and is not recommended for casual hikers. A slip or fall could be fatal.

From the Separation Peak drainage roughly a third of a mile north of Separation Peak, leave the drainage and hike west to the base of the crack where the vertical Nippletop formation undercuts the slickrock slope to the north. Hike/scramble west up the slabs, then start angling north to follow the contours of the slope up a reasonable little drainage. This section is exhausting but 400-feet later, you'll be standing on top of the ridgeline. 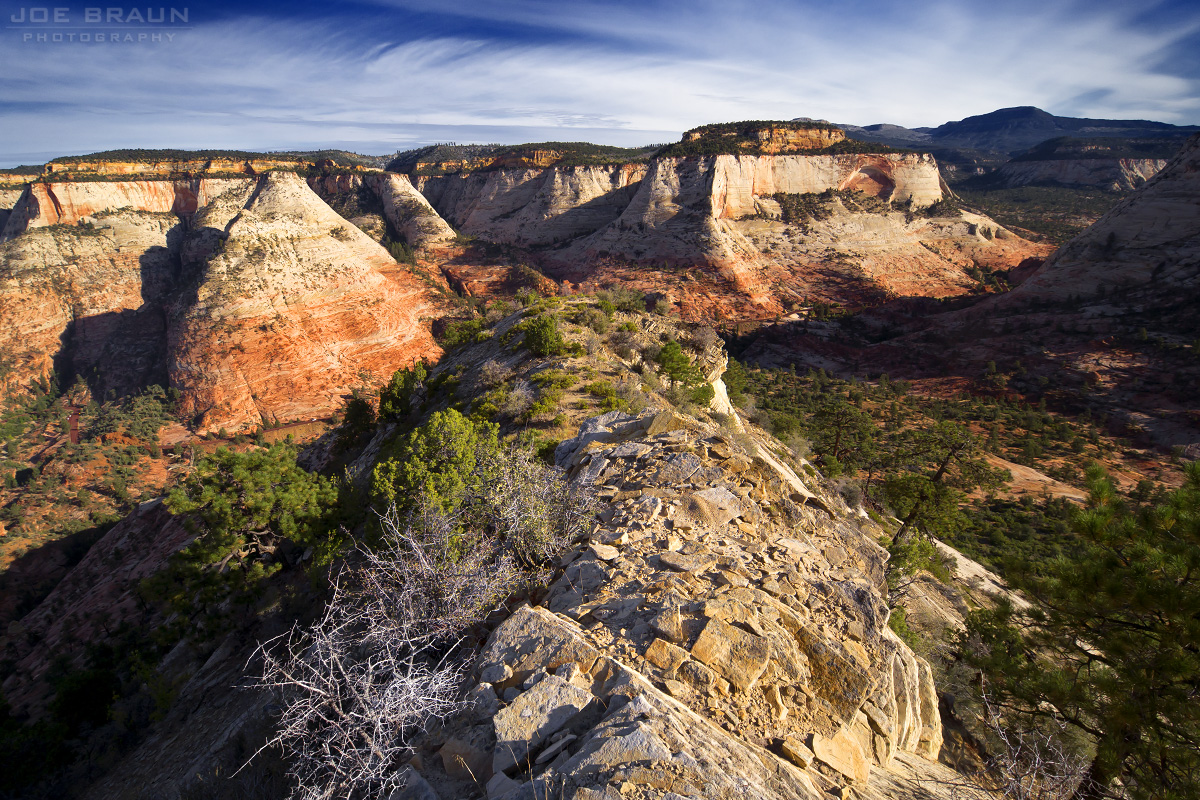 Carefully follow the narrow ridgeline south; there is exposure on both sides and the closer you get to Nippletop proper, the more unlikely the summit may seem, but the route is actually quite reasonable. Once at the base, hike up the steep sandy slopes until you reach the crux of the scramble: a cliff band that blocks access to the summit. Carefully explore the cliff band a bit to the right (west) and you should find a reasonable Class 3 way up.

Once on the summit plateau, make note of your way up and take in the views in all directions. To officially summit the nipple, head for the center of the plateau and some Class 2 scrambling will take you to the USGS marker at the very top. Return the way you came.

Joe's Spin:
Like just about every other drainage in the East Canyon, this is a pleasant hike through some interesting scenery with several spicy options. The views south to Parunuweap Canyon in the distance are quite stunning.

VIEW THE PHOTOGRAPHS! Return to the Upper East Canyon